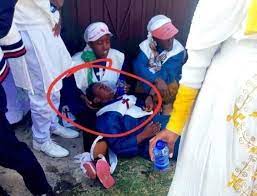 At least three worshipers have been killed in violence at a religious ceremony marking Epiphany in the outskirt of the Ethiopian capital, Addis Ababa.

Many more were injured amidst the violence as thousands of worshipers escorted Arc of Covenant to Wey Bela Mariam Church which is located at border between Kolfe- Keranio subcity of the capital and Oromia region.

The violence erupted as Oromia security forces fired tear gas on worshipers who were nearing the gate of the Church for alleged carrying of Ethiopian tricolor-Green-Yellow –Red flag.

The Oromia security forces have been blamed for attacking the worshipers who carried the national flag or wore clothes decorated with the Ethiopian flag color.

Eyewitnesses said those people who carried a flag of the terrorist designated Oromo Liberation Front (OLF) were spared from the Oromia police’s attacks.

Two Arcs of Covenant, which were supposed to return to the church on Thursday, had to stay at the Keranio Med Hanealem church until Friday.

The Ethiopian Orthodox Church expressed concern over the use force by security officials during such religious ceremony and demanded the government to ensure accountability.

Late Friday, the government said it will investigate the matter and bring the perpetrators before justice.

Petition is underway demanding  the government to bring those security officers who were allegedly involved in the attack.