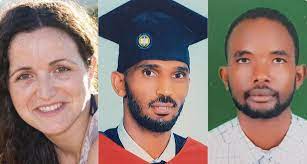 Médecins Sans Frontières (MSF) said its aid workers “were murdered not in crossfire injuries but was in an intentional killing”.

More than six months after the murder of its three colleagues namely María, Tedros and Yohannes in Tigray region, the full circumstances of, and responsibility for, their killing remain unclear, MSF said on Thursday in a statement

“Over the past six months, we have been making every possible effort to understand what happened to them by continuously engaging with the parties to the conflict. We have met multiple times with various ministries of the Federal Democratic Republic of Ethiopia (FDRE) to ensure that their killings are investigated and the findings shared with us. We have made the same requests to the Tigray People’s Liberation Front (TPLF),” President of MSF Paula Gil said in a statement.

Also, as part of our internal standard practice following critical security incidents, we have gathered and analyzed information that has enabled us to reconstruct a detailed picture of the route that the MSF car took, as well as the location and time of the incident and some of the material circumstances of the killing.

“This information confirms that the attack was not consistent with crossfire injuries, but instead was an intentional killing of three humanitarian aid workers, as each of our staff members was clearly recognizable as civilians and humanitarians at the time of the incident,” she added.

“What we know so far based on the preliminary results of this internal review is that on June 24, María, Tedros, and Yohannes were heading on the route south of Abi Adi to search for and collect people injured in areas affected by intense fighting between the FDRE, its allies, and the TPLF. The MSF team based in Abi Adi had received prior information that there were a large number of wounded people in Shoate Egum, a village near where the incident took place. Just over an hour into the journey their car stopped. Their bodies were later found at distances of 100 to 400 meters from the car and their injuries showed that each suffered multiple close-range gunshot wounds.

“It was an intentional killing of three humanitarian aid workers, as each of our staff members was clearly recognizable as civilians and humanitarians at the time of the incident. The car, also well identified with the MSF logo and two flags, was shot multiple times and extensively burned,” she added.