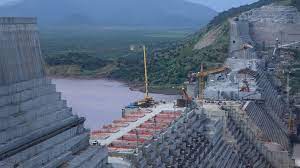 The Grand Ethiopian Renaissance Dam (GERD) is to start producing 700 MegaWatts of electricity in the coming days, boosting the country’s installed power generating capacity by 14 percent.

The country has been in years of intense negotiations over the $4 billion dam with Sudan and Egypt, which lie downstream, and which have expressed concerns over water shortages and safety. They have yet to come to an agreement.

Ethiopia sees the dam as key to its aim of increasing its power generation capacity and development, and says it is taking the interests of both downstream countries into account in its workings.

The 6,450-MW GERD project, being built on the Abay River, is set to more than double Ethiopia’s current power generation capacity from the current about 4200 Megawatts per year.

In August last year, Ethiopia announced a new power plan which aims  to increase its current 4,200 MW of generation capacity to about 35,000 MW by 2037, not only to have more power to serve the country’s own people, but  also to have electricity to export.

Addressing the national parliament in September last year, President Sahlework Zewdie said over 60 percent of Ethiopia’s population do not have access to electricity.