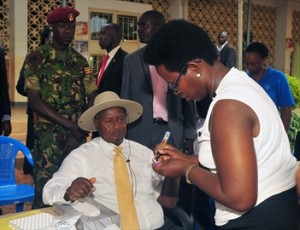 In a rare move, Uganda’s President has publicly tested for HIV as a demonstration of his dedication towards fighting against HIV/AIDS in the east African country.

The leader’s act was considered a spectacle by many, in a country where leaders rarely test publicly for HIV. This is in spite of the relentless recommendations by health workers in this country about the positive implications of such moves on the public’s perception of testing for the deadly virus.

Previously a global leader in the fight against HIV/AIDS, the rate of HIV infections has increased in Uganda in the past few years. The government generally blames this on complacency. However, HIV patients and activists assert that spinning a complacency argument around the increasing rates oversimplifies the circumstance.

Nevertheless, the bold move by the President to test in public is a vital step towards curtailing the spread of the deadly virus in Uganda. Ugandan officials also announced their aspiration to test 15 million persons by the end of 2014.

The officials however recognize the challenges in meeting this target and hope that the President’s move would reinforce their plan. According to a statement by the Uganda Aids Commission, the goal of the public HIV testing and counseling is to demonstrate to every Ugandan the significance of knowing his or her status.

Throughout the function, which took place at Kiswa Health Center in Kampala, President Museveni called upon the media, teachers, parents and all political, cultural, community, and religious leaders to urge their fellow Ugandans to know their status and seek care and medical advice.

Uganda is among the African countries whose fight against HIV/AIDS has gained international acclaim in the past two decades. However, over the last couple of years, the disease has ominously crept back with statistics indicating a rise in infection rates.

According to the Uganda Aids Commission, approximately 130,000 Ugandans are infected annually. However, this figure has risen steadily and currently stands at 145,000, as of last year.

Consequently, Uganda’s President has consistently told Ugandans to avoid risky behaviors and lifestyles that would result in contacting the virus. But HIV testing is crucial to averting new infections. According to experts, people who know their status have a less likelihood of engaging in unsafe sexual behavior.

However, getting Ugandans to know their status has proved challenging in a country that features rampant stigmatization. The increase in infection rates is also stretching the capacity of donors and the Ugandan government to offer HIV/AIDS treatment.

Over 500,000 Ugandans require AIDS treatment with many people accessing it through the United States President’s Emergency Plan for AIDS Relief (PEPFAR). If Uganda attains its testing objective, at least 400,000 more persons will possibly require treatment according to Musa Bungudu, the coordinator for the U.N. AIDS agency in Uganda.