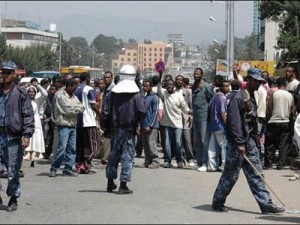 An opposition party in Ethiopia, Unity for Democracy and Justice (UDJ), claims that more than one hundred of its supporters and members faced illegal detention, abduction, and assault between July and September this year.

The party’s leader also alleged that security officials had killed seven of its members and confiscated an undisclosed amount of properties across Ethiopia. The UDJ reported these gruesome violations against its members and supporters in a report launched last week.

The party’s chairman said the report would be presented to the Human Rights Commission to expose the supposed abuses by the Ethiopian government.

The party’s chief, Negasso Gidada, has since asked the government to stop the purported human rights violations and bring the supposed culprits to justice. Prior to joining the opposition, Negasso served as Ethiopia’s President from 1995-2001.

Negasso further claimed some of the party members are still facing intimidation and threats from government agents. However, officials say they have not seen the report. The government accuses the party of routinely coming up with false accusations.

UDJ is among the leading Ethiopian opposition groups and the only one with a parliamentary seat. The opposition party currently holds 1 out of 547 parliamentary seats. This year, the UDJ has held several anti-government demonstrations demanding political reform – one of the most recent was on September 29th.

On the same note, rights groups have asserted that the 2009 anti-terrorism law is vague and stifles peaceful dissent. The opposition claims the anti-terrorism law was specifically enacted to penalize dissidents and critical journalists.

According to the Human Rights Watch, Ethiopia increased its clampdown on peaceful opposition following the 2005 disputed elections. The contention over the election results led to an outbreak of violence and the death of 200 people.

However, opposition leaders deny any ties with these groups and warn that the government’s decision to stifle peaceful dissent may lead to violence.

The Ethiopian Prime Minister recently sent a warning to protesters, he reminded them that harsh consequences awaits anyone who breaks the law. Last year, Andualem Arage, a leading opposition member received a life-sentence for terror-related charges, resulting in a series of demonstrations by the opposition group.

According to Girma Seifu, a senior party official, the UDJ is merely seeking a level playing ground. The party’s leader asserts that his party is still united in spite of the alleged violations.