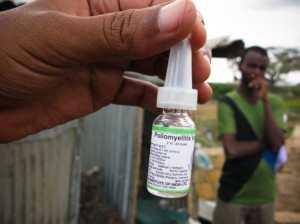 The Ethiopian government is taking action to eradicate a recent outbreak of polio in the Somali region of the country.

The polio infections, which sprung from Somalia, have spread to Kenya, South Sudan and Ethiopia.

So far Ethiopia has reported only six cases of polio, compared with 174 in Somalia. But the landlocked country shares a thousand-mile border with Somalia. Most of it is unmarked and uncontrolled. Goat, sheep and camel herders move back and forth across the arid plains between the two countries seeking fresh pastures for their animals.

The international boundary in the border town of Wajaale is marked by a knotted rope strung across the road. For this reason, Ethiopian authorities acknowledge that it is impossible to have complete control of the flow of people between the two countries.

In order to limit the exposure to polio from outside borders, the Ethiopian government has set up 13 vaccination checkpoints at major crossings. The health bureau has also deployed vaccinators to nearly 40 informal crossing points along the border.

In Wajaale, the vaccination station is a small shack next to the rope on the Ethiopian side. Abdulahi Mohamed, an official with the government’s regional health bureau, says the border vaccination posts are set up to immunize every child under the age of 15, who cross in either direction.

The Ethiopia’s Health Ministry said containing the outbreak of polio is a top priority. Dr. Kebede Worku, the Health Minister, commented on the issue by saying, “If you have a house that’s caught fire, you need to extinguish [the flames], so we take this seriously.”

Soon after polio was detected in Somalia this spring, Ethiopia carried out five mass immunization campaigns against the virus along the Somali border. Earlier this month the country launched a national campaign to try to reach every child in the country — an estimated 13 million kids. The World Health Organization and UNICEF are reported to have provided some funds and vaccines for these initiatives.

However, the vaccination campaigns are organized, run and largely paid for by the Ethiopian Health Ministry, as a result the operation has been a huge burden on an already strained national health system.

The security of medical officers has also a factor, given that they are working in close proximity with Somalia, which is largely controlled by Al Shabab. The Ethiopian government is reported to have deployed special security details to travel with the vaccination teams in some parts of the country along the Somali border.

But perhaps the most difficult challenge for health professionals is the fact that polio infection do not always lead to sickness. The vast majority of people who are infected could be silent transmitters, rapidly spreading the virus to new communities without knowing it.