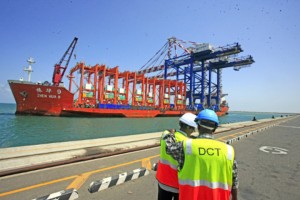 The equipment included two dockside cranes and eight yard cranes, which are expected to help speed up the loading and unloading of ships.

The terminal’s operational capacity is expected to increase following the installation of the equipments, strengthening Djibouti’s position as the foremost regional shipment hub. Expert say the improvement of the Doraleh port’s operational capacity will address the huge demand from the fast growing Ethiopian market.

Doraleh port’s managing director, Saad Omar Guelleh, termed the purchase of the new cranes as an “investment in the future.” He said the benefits would soon be evident in the container terminal’s operating figures.

“We will immediately see a steep rise in productivity in the port’s servicing of ships at the quayside and loading of lorries in the container yard,” he as added.

The Sales and Marketing director at the port’s Container Terminal, Warsame Hassan Ali, told reporters that the new fifth generation dockside cranes could move between thirty and sixty containers, compared to a capacity of ten to twenty five containers for similar yard cranes. The cranes will be unloaded over the next eight and nine days.

Last year, Djibouti entered into an agreement with Hong Kong-based China Merchant Holdings International (CMHI) to boost activity at the country’s ports. Under the agreement, the port was converted from a government-owned property to a private entity with CMHI acquiring a 23.5% stake in the port for 33 billion francs ($185 Million).