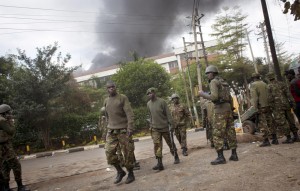 Kenyan Vice President William Ruto has admitted that soldiers from the Kenyan Defence Force may have unlawfully helped themselves to items at the Westgate mall during the operation to free hostages last month.

In the interview on CNN, he described the reports as “unfortunate,” echoing President Kenyatta’s vow to investigate the claims and “find out exactly what happened.”

The release of the video this week, which showed KDF officers taking items off shelves at the Westgate mall and walking around with shopping bags, has sparked a lot of anger and controversy as the country tries to get over the effects of this terror attack.

Several shop owners at the mall had reported missing items in their shops after visiting the mall for the first time after the attack. Images from CCTV cameras released earlier showed empty beer bottles all over the floor, prompting many to question whether the soldiers had a stopped to drink during the operation to free hostages at the mall. But rumours that KDF officers may have looted the mall were easily subdued.

Earlier in the week, Administration and National Security committee chairman Asman Abongotum Kamama and Kenyan Defence and Foreign Relations committee chairman Ndung’u Gethinji caused a public uproar when they dispelled claims that KDF officers looted shops at the Westgate mall. According to them, there were empty beer bottles because the soldiers simply took some drinks to “quench their thirst.”

Several citizens, shop owners and Members of Parliament have expressed disappointment at this revelation, leading many to question the competency of the joint parliamentary commission set up to investigate the attack.

Meanwhile, Vice President Ruto has promised that once found, the offending officers will be punished.

According to some reports, the soldiers may have been performing an operation known as ‘sanitisation’ – whereby an area is ransacked by security officers to clear it of any explosives or traps left by the terrorists, this may have been why they were removing items from shelves.

Tomorrow, the Kenyan Parliament is expected to discuss a bill presented by the nation’s attorney general Githu Muigai, which proposes to create a commission to investigate the attack on the mall. Many experts have expressed optimism that a commission, like the one the attorney general proposes, would be able to finally uncover all the details of the deadly attack which claimed close to 70 lives.

Kenyan authorities say the bodies of 4 terrorists have been recovered from the rubble. However, the identities of the suspects are unknown as forensic investigation is yet to be completed.