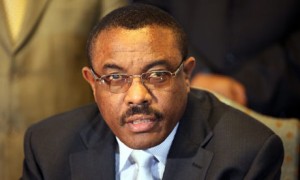 Ethiopian Prime Minister, Hailemariam Desalegn, says his country will launch a debut Eurobond as soon as it secures a credit rating.

Speaking during an interview with Reuters on Thursday, the Prime Minister said the external bond would help solve the nation’s foreign exchange deficit. He however did not specify when the country was expected to receive the credit rating despite hinting that the rating was crucial to the issuance of the bond.

It’s likely that an independent agency will be handling the credit rating, which is expected to provide current credit information on Ethiopia. Such a rating provides foreign investors with information on a country’s economic stability and a good rating can attract a significant amount of funds from outside the country. Other bonds will also be issued alongside the Euro bond.

The East African nation will however continue to maintain a monopoly in the telecommunications and banking sectors because the government insists that it uses revenue from these two sectors to fund infrastructure development in the country.

Prime Minister Desalegn declined to state when the government would open up the two lucrative sectors to foreign investment saying “It depends on how fast we move making the basic infrastructure in the country.”

Commenting on countries in the region that had opened up their banking industry to the private sector, the Prime Minister said they had lost a critical source of funding since the private sector wasn’t providing them with finances for infrastructure development.

He denied claims that his government was not supportive of private enterprise saying that the government was providing loans to businesses but had chosen to keep the 6 billion birr ($318 million) annual revenue from Ethio Telecom since revenue from business licenses and tax couldn’t come close to this.

Ethiopia has the fifth largest economy in sub-Saharan Africa. In 2012/2013 the nation received $2 billion in Foreign Direct Investment and expects to match this for the next two years. Ethiopian officials claim that the economy also grew by 9.7 percent in the last fiscal year.