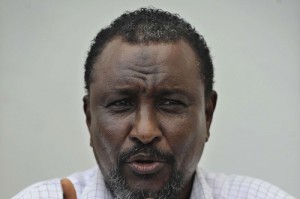 Belgian authorities confirm that they have Mohamed Adbi Hassan (alias ‘Afweyne’), an ex-pirate leader of Somali origin, in custody.

Afweyne was arrested on Saturday along with an associate of his, Mohamed Aden, at a Brussels airport on arrival from Nairobi. The two were lured into taking the trip on the pretext of making expert contributions to a bogus documentary about piracy and crime on the high seas.

According to Belgian authorities, Afweyne is wanted in connection with the high jacking of a Belgian dredger named ‘Pompei’ and the kidnapping of its crew in 2009. The vessel and its crew were later released unharmed two months later, after a ransom was paid.

Till date, only two people have been tried for the crime. Afweyne and his associate are expected to appear before a Judge today where he will be charged for his part in the high jacking of Pompei and for his membership in an illegal organisation.

According to a leading prosecutor, Afweyne is thought to have been the mastermind behind the high jacking of the Belgian owned dredger.

Although Afweyne officially announced his resignation from piracy earlier in the year, he is still wanted by many international bodies. A UN report released last year described him as one of the most influential and notorious leaders among the pirates in Somalia.

Piracy has increased in waters around the horn of Africa since the government of Somalia went defunct more than a decade ago. But as a result of a combined effort by several governments and international bodies to subdue the practice, there has been fewer recorded instances of piracy this year in comparison to last year. However, Somalia remains in a state of chaos.

Over the weekend African leaders at the African Union summit in Ethiopia agreed to increase the number of AMISOM troops in Somalia by 35%. This comes after Al Shabab claimed responsibility for a deadly attack on the Westgate mall in Nairobi last month, which claimed close to 70 lives.

Although the African Union Mission to Somalia (AMISOM) has been able to achieve some stability in the war torn nation, many areas remain under the control of Al Shabab. The raid by U.S Navy SEALS on a compound in Barawe, south of Somalia, earlier in the month highlights the weak state of security in the country.

According to the spokesman for AMISOM, Colonel Ali Aden Humad, AU troops are facing many challenges in their efforts to eliminate Al Shabab. The most notable of these challenges, according to him, is the lack of proper equipments and the relatively small size of the unit carrying out the mission. He insists more countries need to donate troops to the mission in order to eliminate the threat of the spread of Islamic extremism in the horn of the continent.

In the next few weeks, the Somali army and AMISOM troops are expected to conduct a major assault on Al Shabab strongholds in the south of Somalia.