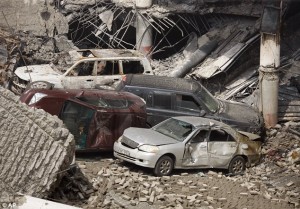 Today, merchants and shoppers visited the Westgate mall in large numbers to retrieve their belongings and make peace with themselves.

Since the attack was officially declared over by the President last week Tuesday, shoppers and merchants have been invited to come forth and claim their properties on the scene, but few have turned up so far.

Some merchants who own stores in the Westgate building accused Kenyan security forces of looting their belongings. People have reported finding their shelves cleared out. Shop owners say the forensic investigation is not being carried out according to the accepted procedure as investigators fail to record the items found on the scene. An officer is reported as saying “There were instructions that we should not record anything as officers moved from shop to shop searching for evidence.”

On the more positive side, media reports reveal that President Kenyatta’s image has benefited positively from the Westgate attack. Many Kenyans are proud of their President’s courage and determination to keep working despite losing a nephew and his fiancée in the attack. Analysts say the attack is also likely to fetch President Kenyatta some more time from the ICC.

This attack has exposed numerous loopholes in the Kenyan security system, which the authorities hope to tackle in the coming months. Today, the Sunday Nation reported that the mastermind behind the Westgate attack may be a 50 year old Kenyan associate of the late Al Qaeda leader, Fazul  Abdullah. Abu Sandheere, the suspect, is thought to have escorted the attackers to the scene before bolting off to Somalia. Although the investigation places him in Somalia, there is no current information on his location.

Officials are still working to clear the rubble in the Westgate mall. No bodies have been found yet and officials predict none would be found.