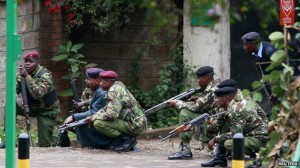 8 people are currently in custody and are being questioned by the Kenyan security forces in relation to the Westgate mall attack.

The security forces report that more suspects were arrested, but some have been released after questioning. The suspects are being held under Kenya’s Anti-Terrorism law, which permits security officers to keep suspects in custody for long hours in the interest of national security.

The Interior Cabinet Minister said the government is holding the suspects in custody in hopes of “unmasking the faces behind the terror attack.” Yesterday Interpol issued an arrest warrant at the Kenyan government’s request for Samantha Lewthwaithe, a British citizen wanted by the Kenyan police. Officials say although Lewthwaithe cannot be immediately linked with the September 21st attack, she is wanted in light of the attack.

The lawyers of Ali Gitonga – one of the arrested men – filed a writ of habeas corpus today demanding the release of his client. Ali is reported to have been arrested at a hospital where he was receiving treatment for injuries. Ali Amin Kimathi, executive director of the Muslim Human Rights Forum said “the state has not provided any information that suggest there is a good reason why he is arrested.” He described the arrest as a case of profiling.

The Kenyan government is yet to release any concrete information on the reasons behind the arrest of the 8 suspects. Authorities are expected to gather more information about the attack and the attackers from the rubble at the Westgate mall.

Cabinet Secretary for the Interior Ministry, Ole Lenku said “investigators are systematically sifting through the rubble and are reporting good progress.”

The Westgate attack left about 61 civilians and 6 security officers dead.