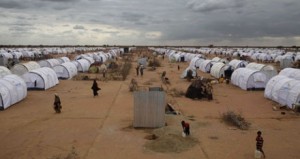 Gunmen suspected to be from Somalia have attacked a refugee camp in Dradaab, northern Kenya, on Thursday night.

This attack comes after the Westgate attack and a boarder incursion by Al Shabab on Wednesday which left about 2 people dead and more injured. The refugee camp the terrorists attacked is reportedly one of the largest in the world. “The attackers who we suspected to be members of Al-Shabab or their sympathizers raided the camp at around 8:30 p.m. [20:30 GMT]. They used explosives to break into the fortified compound through the metallic gate.” Kalicha Roba, Dradaab district police commander explained to the media.

Commandeer Roba said he suspected Al Shabab to be behind the attack. “Fortunately no one was injured in the raid that took some minutes since most of the staff in the compound who were mainly teachers took cover and hid within the big compound immediately the first explosive to open the compound gate was fired,” he added.

Besides the terror this attack has spread over the Dradaab area, the other damages this attack leaves is a blown gate and a few holes in walls. The local police have since increased their presence in the refugee camps.

Commander Roba explained that his officers were searching thoroughly for the attackers within the camps, while officers at the boarder have been put on high alert to ensure they don’t escape.

Al Shabab is yet to claim responsibility for this attack. However, it follows in line with the group’s vow to continue attacking Kenya until the Kenyan government withdraws its troops from Somalia. In a voice message to the people of Kenya after the Westgate attack, Al Shabab leader Abu Zubeyr justified the attack on Westgate mall saying, “We are telling the people of Kenya that you have [are] involved in a war which you are not suppose to [be] involve[d], a war that is against your interests. You lost your security and your economy. You lost your sons. You are part of the perpetrators of the genocide which your army has done in Kismayo and in other areas because you are the people who elected the politicians. The army of Uhuru that massacres the Muslims is armed using the tax that you pay and you have supported the decision for the war.”

Kenya and other east African countries have been attacked multiple times by Al Shabab in the past few years. The group explains that these attacks are intended to persuade the governments of these nations to withdraw their troops from Somalia.