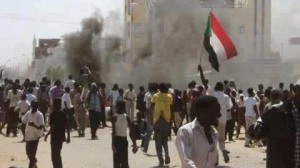 After midday prayers today, protesters took to the streets of Omdurman, demanding the government bring back the fuel subsidies it scrapped and step down. Currently, the rate of inflation in the Sudanese economy is close to 40%.

The actual number of people killed in yesterday’s clashes is still in question. Human rights group Amnesty International estimates that about 50 people were shot and killed by the Sudanese security officers. However, the group was cautious to add that “Local sources and activists have put the figure much higher, in excess of 100.”

The protests have, for now, been centred in Khartoum and cities close to it like Maddani. Protesters are reported to be targeting petrol stations, police stations, government buildings and checkpoints.

Clouds of black smoke have been drifting over the city’s skyline since the protests began on Monday. Numerous buildings and properties have been destroyed so far.

The Sudanese government described the protests as “premeditated sabotage.” Since Monday, the government has flooded the streets of Khartoum with armed officers in a bid to keep the peace. Foreign embassies have also advised their citizens to stay away from dangerous areas. Unconfirmed reports seem to suggest that security forces are ignoring President Bashir’s orders to clear the streets.

The Sudanese government has been accused of shooting at unarmed protesters. Lucy Freeman, Amnesty International Africa Deputy Director said “Shooting to kill – including by aiming at protesters’ chests and heads – is a blatant violation of the right to life, and Sudan must immediately end this violent repression by its security forces.”

The U.S. Embassy in Khartoum cautioned the protesters and the government “not to resort to force and to respect civil liberties and the right to peaceful assembly.” The statement also described reports of injuries and destruction of properties as regrettable.

This is the largest protest since President Al Bashir took power in 1989, and the protesters are convinced they can successfully topple the regime. Hafiz Ismail, an economist and commentator said “The protesters will make the government change its policies – policies which will kill the people.”

The Alliance of the Youth of the Sudanese Revolution, one of the groups behind the protests released a statement saying its goal is to usurp President Bashir “along with the corrupt government and for its service to be dismantled.”

Whether this will be possible remains to be seen. Rishab Oshi, one of the activist in yesterday’s demonstration said “The people who are protesting are ordinary people and don’t belong to any political parties. I considered [sic] it like a revolution of the downtrodden and the hungry.”