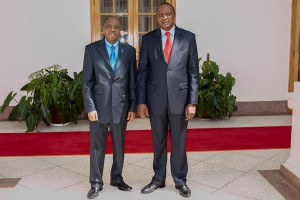 President Uhuru Kenyatta of Kenya today announced the appointment of Joseph Kinyua as his new chief of staff and head of public service.

The announcement was made at a meeting of cabinet and permanent secretaries at the state house, Nairobi. This decision may have been influenced by the Westgate attack. Over the next few months, the Kenyan government will have a lot to deal with, and experienced hands will be valued.

Mr Kinyua expressed his gratitude to the President for his appointment and promised to continue in earnest service to his nation. “I have served my country for the most of my life with dedication and will continue to do so in this new role. I am deeply honored by the trust and confidence the President has shown in me,” he said.

Joseph Kinyua is one of the foremost economists in Kenya. He earned his Bachelor and Master’s degrees in economics from the University of Nairobi. In the past three decades, he has worked with several governments, private agencies and international bodies. This includes East African Cables Ltd, The Kenyan Central Bank, the International Monetary Fund (IMF) and the Kenyan Ministries of Finance and Treasury.

For most Kenyans, Kinyua is mostly remembered for his remarkable role in transforming the Kenyan economy when he served as Permanent Secretary to the Treasury under former President Kibaki’s rule.

After announcing the appointment of Kinyua, President Kenyatta said “I have absolute trust and confidence that you will continue to serve your country with distinction.”