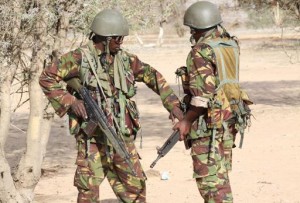 Two police officers were killed and three others injured in a Thursday attack on a Kenyan police station in Mandera town which borders Somalia.

According to witnesses, the attackers threw a rocket propelled grenade into the station and set it on fire before escaping. The fire destroyed 12 vehicles at the scene.

The office of the Assistant county commissioner blamed the attack on “criminals” but declined to comment further.

The regional police commander, Charlton Mureithi, said “No arrest has been made but we hope to catch up with them. They caused huge destruction,” Mureithi stated.”

This attack occurred less than 24 hours after a Wednesday evening grenade attack in the northeastern town of Wajir.

Al-Shabab militia also attacked a shopping mall in Nairobi a few days ago killing 72 people and bringing about a four-day standoff between the terrorists and the Kenya Defence Forces.

No one has claimed responsibility for the attack yet but such attacks are becoming increasingly common especially in towns along Kenya’s border with Somalia. These attacks are often blamed on the Al-Qaeda linked Al-Shabab militia.