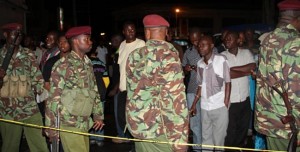 One person is reported dead and at least two others injured as twin explosions and gun-battle rocked Wajir in the past 48 hours.

The unidentified attackers are reported to have thrown a grenade into a shopping mall before bolting off the scene on Wednesday evening. According to the Divisional Police Commander, Isaiah Odhiambo, “Unknown criminals hurled explosive devices at the crowd of the people in Wajir town around 7:30 p.m., injuring three people whom we have rushed to the hospital. The attackers fled immediately after hurling the explosives.”

He added that although the motive behind the bombing was unclear, it was too premature to link it to the Westgate attack.

Later that evening, the Kenyan Red Cross reported a shoot out between unidentified gunmen and local police.

Only a few hour ago, Odhiambo confirmed that the police have one of the suspects from the scene in their custody. “He is under our watch at the hospital where he is admitted and we will interrogate him immediately he is discharged.”  The suspect is said to have been badly injured after failing to get to a safe distance before his grenade exploded.

Wajir is located in the Northeastern part of Kenya and, being only 100 miles from the Somali boarder, has a large population of Somali-immigrants, most of them Muslims. Recently, Wajir was the site of a clan conflict that left many dead.