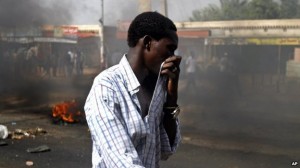 Reports emerging from Sudan reveal that at least 29 people have been killed in protests over the government’s removal of fuel subsidies.

A hospital in Khartoum confirmed that it has received the bodies of 21 “civilians” killed in the protests. While reports from sources around the country confirms that at least 8 more people have been killed.

The protests, which broke out on Monday in Khartoum, is said to be largely orchestrated by students. The Sudanese authorities have already closed all schools in the country until September 30th.

Earlier the protesters made their way through major locations in Khartoum, torching buildings and setting burning tyres on the street. The protest only turned deadly when protesters confronted security officials with stones and bricks. The police responded by shooting tear gas and rubber bullets.

This protest, the largest since Sudan’s President Omar Al Bashir took office in 1989, seems to be inspired by the “Arab spring.” The Sudanese government have meanwhile responded with a threat to “strike with an iron fist against those who damage public property.”

Since Monday, the streets of Khartoum has been flooded with protesters calling for the end of President Bashir’s rule. “The people want the fall of the regime!” They chanted. “We came out, we came out against those who have stolen our sweat,” one protester said in a video on YouTube.

The protests began after President Bashir announced the removal of fuel subsidies because it had reached “a level that is dangerous for the Sudanese economy.” Already, the nation has an inflation rate of over 40%.

President Bashir has cancelled his trip to the UN General Assembly in order to deal with the protests. It was announced that his foreign minister would speak in his place. Meanwhile, the U.S government warned its citizens to stay away from dangerous areas as it expects more confrontations and causalities. There has been no internet access in the Sudan in the past few days and technicians are yet to confirm if it is a move by the government or it is due to some technical failure.

For now no arrests have been made, but the Sudanese Police blamed outlaws for the protests and promised to intervene to avoid “law-breaking and damage to private and public property.”

This protest has, for now, quelled a major international dispute that has been threatening to explode for some time now. The ICC’s warrant for the arrest of President Al Bashir puts into question many laws regarding the immunity of a serving President and the sovereignty of nations in regards to international agreements. Many observers were keen to see if the U.S government, like many African nations, was going to allow President Bashir attend the conference despite the standing warrant for his arrest.