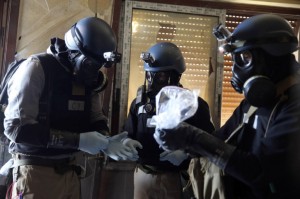 The Ethiopian Government has expressed grave concern over allegations that Syria has been using chemical weapons.

The allegations were contained in an investigative report by the United Nations Mission. The report confirmed that the Syria Arab Republic used large quantities of the nerve gas sarin in the Ghouta area on the outskirts of Damascus on 21 August 2013.

The Ethiopian Ministry of Foreign Affairs (MoFA) on Friday condemned the crime saying that those responsible for this crime must be held accountable. The ministry also applauded the efforts and professionalism of the UN Mission during the investigation which took place under difficult circumstances.

In the 1930s, Ethiopia became one of the first victims of poison gas at the hands of the Fascist Italian government. The African country is also a party to the UN Chemical Weapons Convention.

Ethiopia has echoed a statement by the United Nations Secretary General Ban Ki-moon which had terming the findings as comprehensive “beyond doubt and beyond the pale.” The report for instance included compelling details on the trajectory of poisoned-filled rockets.

The Ethiopian ministry also said that it hoped the UN Mission would return to Syria and complete the investigation. In the meantime, all efforts should be directed towards finding a political solution for the Syrian tragedy, the ministry added.

Ethiopia is now calling upon all parties to the conflict to cooperate in the destruction of Syria’s chemical weapons under the framework agreed upon by the Russian Federation and the United States.