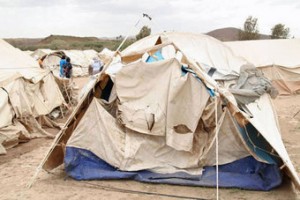 The Kenyan government has allocated $37.8 Million towards the resettlement of 8,298 households still living in camps after they were forced out of their homes in the 2008 post election violence where 1200 others died.

Cabinet Secretary for Devolution and Planning, Anne Waiguru, told reporters in Nairobi that “resettlement of IDPs is a key component in assuring Kenya’s long-term stability and the Jubilee Government is fully committed to taking steps to resolve this matter.”

“We want to ensure that those who were unwillingly uprooted from their homes and livelihoods find a way into normal society,” she added.

The Principal secretary in the ministry of devolution, Gideon Konchella, also told residents of Vumilia camp in Naivasha town of Kenya that “The government will use Sh3.3 billion to resettle the IDPs and forest evictees as per President’s promise.”
He also said that this exercise is expected to be through by end of this month.

Over 250 households living in vumilia camp will benefit from the funds. Each household will receive $4600 to purchase land and an extra $115 to enable them vacate the camps. Once the resettlement has been completed, the camps will be shut down.

Politicians from the opposition have termed the resettlement efforts by government as an attempt to look good ahead of Deputy President William Ruto’s trial at the International Criminal Court next week.