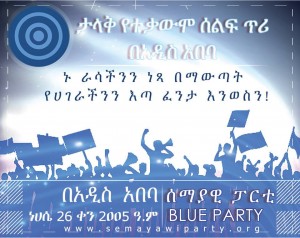 Members of the Ethiopian opposition were on Sunday denied an opportunity to hold a rally demanding the release of jailed activists.

The Blue Party had sought authorization to hold a public rally on the same day as the Ethiopian Inter Religious Council whose rally was focussing on radicalism perpetrated under the guise of religion.

According to Addis Ababa Police deputy Commissioner, Girma Kassa, the Inter Religious council was the only organization that had received approval to hold a public rally at Maskal Square on Sunday.

The head of the Blue Party, Yilkal Getnet, claimed that the police raided the Blue Party Offices in Addis Ababa and seized banners and other equipment that was set to be used in the protest. Some party members were also assaulted in the process.

The Addis Ababa Police Deputy Commissioner had previously stated that any attempt by the Blue Party to hold a rally on Sunday would be countered by the police and the parties held legally accountable.

Several rights activists have accused the Ethiopian government of unfairly targeting and harassing Muslims while accusing them of terrorism. Approximately 28 Muslim activists have been arrested in the country for alleged terrorism.