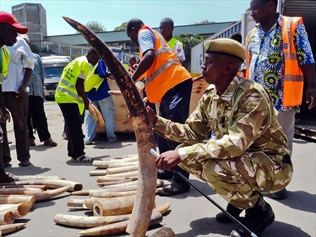 An ivory smuggler of Chinese origin has been sentenced to two and a half years in prison by a Kenyan Court, in a ruling expected to signal harsher penalties for poachers and smugglers.

Reacting to the verdict, Kenya Wildlife Service (KWS) spokesman, Paul Udoto, said, “a precedent has been set by this sentencing, it is a sign that our judiciary is waking up to the scale of the crisis and the damage that is being done to our animals.”

“It is the longest such sentence I have seen for a long time,” he addes. “Now those who want to damage our wildlife must also test our prison system.”

Chen Biemei was arrested on August 14 when she tried to smuggle 6.9 kilograms of worked ivory to Hong Kong disguised as macadamia nuts. In the beginning she pleaded not guilty but later changed her plea to guilty.

This ruling comes after a public outcry over the weak penalties handed to ivory smugglers arrested in Kenya. A US army colonel who was arrested for attempting to smuggle 1kg was in June fined $340, which was viewed as too lenient considering that elephant ivory can sell for up to $1000 per kg. Another Chinese smuggler who was caught will 400 pieces of finger-length ivory pieces was fined less than $350.

Official figures reveal that 384 elephants were killed in Kenya last year up from 289 in 2011. This year, approximately 200 elephants have been killed by illegal poachers and 17 foreigners arrested for trying to smuggle ivory out of Kenya.

The billion-dollar, illegal ivory trade in Kenya is mostly driven by demand from Asia and the Middle East where it is used for traditional medicines and jewellery.