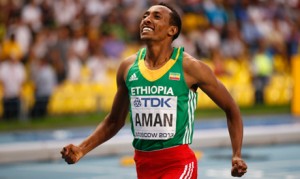 Mohammed Aman became the second Ethiopian athlete to win a gold medal at the Moscow World Championships after a breathtaking finish to the men’s 800 meters race.

This win comes after, world and Olympic champion, Tirunesh Dibaba won gold in the 10,000 meter race in 30:43.35, remaining unbeaten after 11 tries.

Aman is also the first Ethiopian to earn a medal in the world 800 meter race.

“I’m the first Ethiopian to win a 800m gold medal!” Aman said. “This gold medal is a big thing for me and my country.”It was not easy; a world championships final is such a hard race. All the athletes in the race were very strong and it’s a double pleasure to be first in such company.”

“I was confident because I have speed on the last 100 metres and also nervous because it is the worlds and one has to be careful and smart,” added Aman. “I didn’t want to be boxed in like the semi-final so I just stayed patient when Symmonds and Solomon kicked off.”

Although Aman was smaller in size and outmuscled by his competitors, he surged ahead in the homestretch attaining his best time of the season -1:43:31- and beating American Nick Symmonds and Djiboutian Ayanleh Souleiman. Symmonds came racing through at the bell and won silver in 1:43.55 while Souleiman took the bronze in 1:43.76.

American Duane Solomon and Frenchman Pierre-Ambroise Bosse also attempted to fight their way to the front in the final 200 metres of the race.

Some notable talent such as Kenya’s, Olympic gold medalist and world record holder, David Rudisha was absent from the race. He has been out injured for most of the season.

“The competition without Rudisha was like a gift on a silver plate and nobody wanted to waste the chance,” said Symmonds. “I’m happy with my performance,” he added. “I had a chance for gold and I hope someday I’ll win it.

Souleiman’s bronze is the first medal of any kind for Djibouti since Ahmed Salah took silver in the 1991 Tokyo worlds marathon.

“Tonight all of Djibouti will celebrate because there hasn’t been any medal since 25 years,” said Souleiman.

Aman has beaten Rudisha twice in the past and won his six last races.