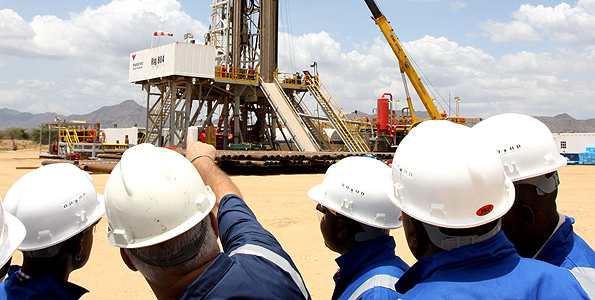 Japanese investors, led by the Marubeni Corporation, have shown interest in securing deals within Kenya’s oil sector.
The investors are particularly interested in funding the construction of a pipeline which will connect the country’s refinery and marketers to the drilling site. This interest comes after the discovery of commercially viable oil and gas deposits in Turkana County in the country’s north.

Speaking at a Kenya-Japan business forum in Nairobi, Hirohisa Miyata, the chief operating officer in charge of power projects and infrastructure at Marubeni said “We seek to actively venture into the oil sector.” Marubeni Corporation is a conglomerate with offices in Kenya’s capital city, Nairobi.

Representatives from 15 private companies from the energy, financial, construction and auto industries attended the Kenya-Japan business forum. One of the companies Japan Oil, Gas and Metals National Corporation (Jogmec)  has collaborated with the National Oil Corporation of Kenya (Nock) and is drilling for oil and gas in Block 14T in Magadi, Kajiado County.

Jogmec’s Executive Director, Hisanori Nei, said “Kenya has a lot of opportunities for Japan to invest in. The latest market front is oil.” Japan has traditionally been involved in exporting industrial, vehicle and electronic products to Kenya but has also shown interest in funding geothermal projects in Kenya’s electricity sector.

According to Kenya’s Cabinet Secretary for Energy, Davis Chirchir, “a few months ago the country benefited from a Sh1.2 billion grant from the Japan government and have promised to sponsor the learning of more staff in the petroleum sector.”

Foreign Affairs and International Trade secretary Amina Mohamed urged the Japan delegation to take up existing opportunities in Kenya. Japan remains one of Kenya’s official development partners having disbursed official development assistance (ODA) to the tune of Sh419 billion as at June this year.