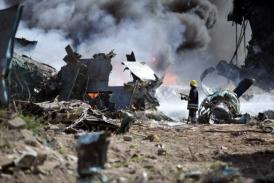 According to witnesses, the plane exploded into flames soon after it crashed at the international airport; thick black smoke was seen rising into the sky soon afterwards.

Several loud explosions were heard after the crash indicating that there might have been munitions on board.

Officials said that four crew members out of the six aboard the plane died in the crash; the cause of the crash has yet to be established.

Ethiopia has so far not commented on the situation.

Ethiopia has been assisting the Somali government in the battle against the Al-shabab, an Islamist militant group is attempting to impose very strict Islamic rules on the country.