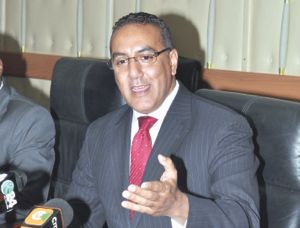 Kenya’s mining ministry has cancelled several prospecting and mining licenses issued earlier this year and suspended the commissioner of mines following complaints regarding the licensing process.

Speaking at a news conference, the mining minister, Najib Balala, said the revoked licenses had been issued hurried and without transparency. “We want to ensure the country gains from the mineral potential,” he said.”Any licence issued between 14 January and 15 May is hereby revoked immediately as we review each case to determine their nature and benefit to the country.”

The East African country has recently discovered new deposits of titanium, copper and niobium which could be worth billions of dollars. Kenya also has proven gold and coal deposits.

‘Shrouded in secrecy’
The country’s mining cabinet secretary said earlier this year that he would spearhead the review of laws governing the mining sector. There are currently over 300 local and foreign firms who are either involved in prospecting for minerals or small scale mining.

BBC World Service’s Africa editor, Richard Hamilton, said that in the past Kenya’s mining sector has not been very large. However, recent discoveries of new minerals have brought in more local and international speculators.

“Among those discoveries is a rare mineral called Niobium which has been found along the Kenyan coast,” he said.”Its properties make steel more heat-resistant and it’s used in everything from oil pipelines to jet engines and MRI scanners.”

The International Monetary Fund (IMF) last week said that the new mining contracts were shrouded in secrecy.
Mr Balala says that he will ensure transparency in such deals by improving legislation in the sector.