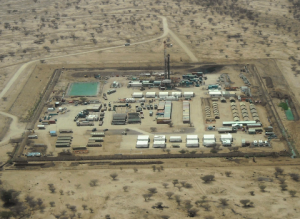 The successful drilling of Etuko-1 well in Kenya has confirmed the commercial value of oil fields in the country, says Tullow Oil Plc (TLW) the U.K. explorer that found Kenya’s first oil.

The company also predicts that a pipeline picking up Ugandan crude could deliver up to 500,000 barrels a day of new output.This amount would likely be delivered to the east-coast port of Lamu near the border with Somalia boosting the current sub-Saharan African output of 6.2 million barrels by 8 percent. This could replace the production lost by troubled top exporter Nigeria in the past three years.

Tullow has in the past expressed its hopes for 250,000-barrels-a-day pipeline from the Lake Albert region in Uganda, where the company has been drilling, expecting to make the first deliveries by 2018. It has also said that Uganda’s production could tie-in to its Kenyan prospects.In June, Uganda’s President Yoweri Museveni and Kenyan President Uhuru Kenyatta agreed to work together on a pipeline route to ship oil between the two countries and later from South Sudan.

The Etuko-1 result, in addition to two other wells, increases Tullow’s estimate of oil resources within Kenya’s Lokichar basin from to 250 million to 300 million.A 1,300 to 1,400 km (800-870 miles) long Kenya-Uganda pipeline could become a reality “at a similar date (2018)”, said Paul McDade, the company’s chief operating officer.

“When you start to take into account the potential of Kenya, and Lokichar is just the first component of what Kenya could be, it could be much more material than 250,000 barrels a day. It could easily be 500,000 barrels a day or even beyond depending on the exploration success we continue to have in Kenya.”Kenya could begin exporting oil by rail and road from as early as 2016, McDade said.

“We are highlighting the ability to get focused on development early… (but)… It’s early days. We are only initiating discussions with the Kenyan government” on how to develop its reserves, he said.”We have 90-plus exploration prospects yet to drill in Kenya so there’s a long way to go before we’d understand the full value of this acreage.”

Tullow is mainly an explorer that brings in investors with more financial resources for the development stage of its projects. Africa Oil is its partner in Etuko-1. On Wednesday Tullow shares proved the best performer among European oil stocks in the Dow Jones Stoxx 600, with an increase of 1.9 percent to 1,046 pence.