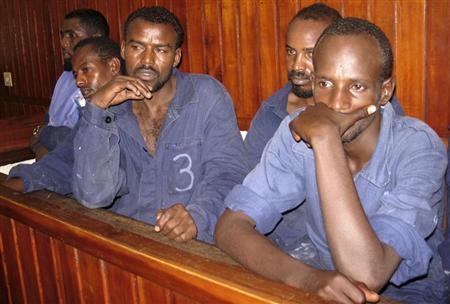 Nine Somalis who had attempted to hijack a German merchant vessel MV Courier in the Gulf of Aden in March 2009 were, on Tuesday, sentenced to five years in prison each by a Kenyan court in the coastal city of Mombasa.

International anti-piracy forces arrested the men before handing them over to Kenya for prosecution, as Somalia was not considered able to try them properly.

According to the World Bank, piracy emanating from the Horn of Africa nation could still cost the world economy about $18 billion a year, despite a marked decline in the number of attacks since 2011 thanks to tougher security aboard ships and increased Western naval patrols.

Prosecutors told the court the men attacked the ship armed with a rocket launcher, an AK-47 rifle, a pistol, a SAR80 carbine rifle, and other weapons.

“The suspects used violence to hijack the vessel, and took control of it, putting in fear the lives of those aboard,” prosecutors said in the charge sheet. Kenyan officials said 18 crew on board survived the ordeal.
The nine suspects were held in custody at one of Kenya’s maximum security prisons during the trial period. They all denied the accusations.

While handing out the sentence, the court noted that the accused had already served a long term in jail while the trial was in progress, and therefore were given shorter jail terms.

“I am satisfied with the evidence presented by the prosecution, which proves beyond reasonable doubt that an act of piracy was committed,” judge Stephen Riech said.

Riech ordered that the nine Somalis be deported back to their country of origin after serving their sentences.
Last month another nine Somalis were found guilty of hijacking a ship in the Gulf of Aden in 2010 and handed a similar sentence at the same court.