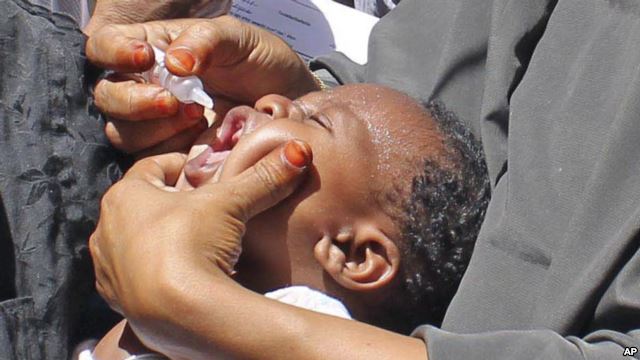 Ninety Four (94) cases of polio have been reported in south-central Somalia pointing to a fast spreading outbreak, says Somalia’s Ministry of Health. New cases of the disease near the porous border with Ethiopia have also put that country at risk.

The polio outbreak currently spreading throughout Somalia was first detected in May in the Dadaab refugee camps in Kenya, according to Dr. Yassin Nur, head of immunization at Somalia’s Ministry of Health.

He said another case also has been reported in the autonomous region of Somaliland, near Ethiopia, further increasing the risk of transmission across the border.

“The risk is there,” Nur said. “Not to mention that Ethiopia is having a very long border and border with Somalia and it would be very easy to have the outbreak in Ethiopia.”

Before the new outbreak, polio had been nearly eradicated across the world, with active cases reported only in three countries: Afghanistan, Pakistan and Nigeria.

But the U.N. children’s agency UNICEF said that in May, a two-year-old girl in Somalia was confirmed to have contracted polio, becoming the first case in the country since 2007.

According to Nur, Internally displaced people, of which Somalia has more than one million, are most at risk of contracting the virus that causes polio. Their constant movement raises the risk of spreading the disease.

A vaccination campaign launched in coordination with U.N. agencies, as well as local and international organizations could potentially “limit and control” the transmission of the disease, hopes Nur.

According to the U.N. almost four million people have received a polio vaccination in Somalia since May.

The disease, which mostly affects children, has no cure and can paralyze those who are infected.