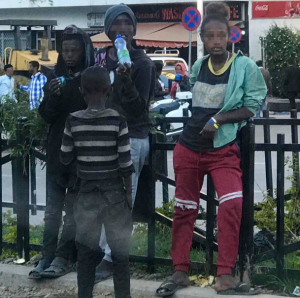 African countries are highly affected by having a lot of street children. According to the Royal Tropical Institute (KIT 2002), a research organization in the Netherlands, report our world has almost 100 million children living on the streets, among from 100 million street children majority of streets kids are in developing countries. Though, the exact number of street children in Ethiopia are yet unknown. Cities in Ethiopia especially the capital city Addis Ababa has been challenged by the growing intensity of street children. A study by Shemles Shimelis Kassa Kebede Lecturer of Governance at Arbaminch University shows that poverty, violence at home and family disintegration are the leading factors for children to start street life.

At some point, children start street life by their choice. Their first introduction for street life is when their families send them to work on the street or find some food for their self or the whole family, and they probably used to it and end up by living there. By having this little glance in mind we want to discuss how children’s in street are struggling with life and the challenge they are facing.

Basic necessities including Food, healthcare, and home are the main thing what every street kid is looking for. They always try to keep their life alive by begging, stealing and barely working in low paying jobs. Frequently they faced various challenges, especially during the winter season. Hence, they don’t have a safe place to stay it is always hard to survive when it rains and when it becomes cold. They usually use some alcoholic and gaseous yellow substances, which they think make them feel hot, forget starving and sleep for long.

One of the most dangerous practices in street life is Glue sniffing. The problem with this yellowish substance, which is also known as “Glue” is various. Glue contains solvents including naphthalene a form of benzene and other solvents found in the adhesive are very dangerous for human health. Different studies showed that, sniffing of glue causes, respiratory failure, headaches, dizziness, loss of muscular coordination of movement, drowsiness, coma and the possibility of death. To make it worse it is very addictive and children’s on-street eventually become addicted to this substance when they struggle with nightlife on street and they will immediately start using this substance during the daytime too.

Street children in Addis Ababa, usually use glue to get rid of feeling such as hunger, cold and depression. When you walk through the busy streets of Addis Ababa you would see so many kids holding a plastic bottle and if you give attention and look to what is in the bottle, you will see a yellowish substance and you may even see them sniffing and sharing one bottle. Most of the time the substance in the bottle is glue. They prefer glue because it is cheaper than any other alcohol or drugs. Children have become unconscious and too high especially when they took too much glue. When they become unconscious a car would hit them on street and probably they would die.

When you ask them why they sniff glue they always answer because they are hopeless, unwanted and they feel as if nobody cares for them. Actually, society threatens them as outsiders. That’s the reason behind for their crime. Since they feel unwanted and when life becomes harsh, in winter time they do crimes on purpose and spend the harsh time in jail.

In conclusion, the government should act on this issue urgently and working on reducing and eliminating street children’s is a must. Meanwhile, establishing a rehabilitation center for the addicted once, which Ethiopia may not have at all, is mandatory. Because integrating these kids to the community directly may put physiological problem both to the kid and the community. Furthermore, the rehabilitation centers may also help any youth in university or other related places. In general, having rehab centers in health sector’s can be also taken as a starting point.