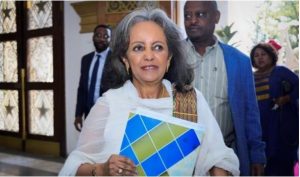 Increasing social, political and economic strength of women’s in Ethiopia is still a huge concern. In fact, more than 70% of Ethiopian population resides in rural areas and getting high school education is not easy. Distance, education materials, personal insecurities can be mentioned as some of the leading factors for women’s in Ethiopia to not attend high school, tertiary school, and other high-level education. Though Ethiopia has 35% percent of undergraduate university students and there are different challenges for those students to drop out of school. Once they drop out of school their chance of becoming an independent woman is unlikely. Obviously, girls in Ethiopia are way too far from boys in school enrollment and achievements. In addition to poverty, cultural practice and traditional beliefs play a significant role. 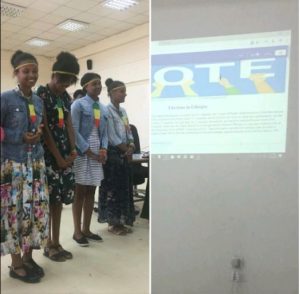 This is a picture posted by a professor in Gondar University, who tried to express his excitement about four female students of computer science when they were presenting their senior project, which is about the election in Ethiopia. It is always good to appreciate students especially women’s in technology and we really appreciate his evolvement. However, this picture talks a lot about the students feeling. Someone can tell their shyness, can be also lack of confidence from their physical appearance. Trying to avoid eye contact and inappropriate gestures can be mentioned as some of the top signs of shyness. Thus, if it is possible all of these characters from a woman who studied in college more than four years, then it is a very easy calculation to understand how difficult and challenging can it be for a woman who didn’t go to school at all.

Selam An electrical engineering student from one of the Universities in Ethiopia once pointed out that she was unable to have lunch or dinner in university dining service places because she was scared of eating food while a lot of men’s are around. Due to cultural practice, including proverbs which always preach that women should be kept in the home and do all the cooking, washing and every other home stuff, a lot of women in Ethiopia suffer in shyness and lack of confidence. Moreover, it is still affecting even the educated once. In addition, women in rural areas don’t have role models. It is because; most leadership positions are occupied by men. Therefore, naming women to half of the cabinet’s position and appointing the first women president is a big milestone in Ethiopian politics and it will eventually encourage women’s in every position in Ethiopia. However, there should be a big line to be remembered that this is not the only solution to the above-mentioned challenges.

Empowering many women into different position can break the cultural practices and inspire girls but the government should work more on the other side of the problem. Providing education, supporting girls, and creating independent women should be the next step. We want to conclude with this is a well-know Malay’s proverb “If you are too shy to ask, you might lose your way. When you go away, the conversation changes.