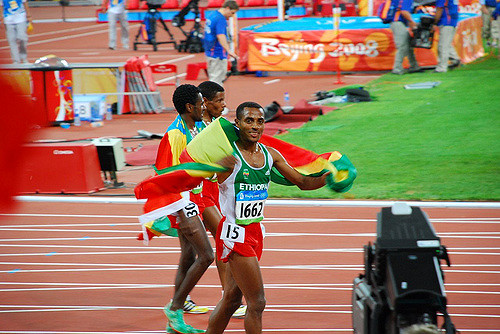 Ethiopia’s 5,000m and 10,000m world record holder Kenenisa Bekele, who was left out of the country’s Rio Olympic athletic team, has won the 2016 Berlin Marathon.

On Sunday, Bekele won the marathon with a time of two hours, three minutes and three seconds. The 34-year-old’s finishing time was just seven seconds behind a world record set by Kenya’s Dennis Kimetto, AP reported.

Although Kipsang’s time earned him the second position, it was faster than the 2:03:23 world record time that he set to win the 2013 Berlin Marathon.

Bekele, a decorated triple Olympic winner, was not included in his Ethiopia’s both 10,00m and marathon team because he did not pass the selection criteria.

Bekele, who expressed his disappointment at the news of his omission in July, said members of Ethiopia’s Athletics Federation (EAF) have very little knowledge of athletics.

Feyisa Lilesa, now famous for his finishing line Oromo protest gesture in Rio, claimed the silver medal for Ethiopia at the Olympics.

Lilesa, who used the international games to protest against the Ethiopian government’s alleged crackdown on Oromo protesters, was one of the four athletes in Ethiopia’s marathon team.

The leaders of the Ethiopia Athletics Federation (EAF) have been blamed for the country’s mediocre performance at the Olympics.

In August, the Ethiopian Athletes Interim Committee, which is comprised of coaches, elite, and veteran athletes, blamed the heads of the EAF for the fact that Ethiopia ranked 44th place on the Rio medal table.

Ethiopia’s legendary athlete, Haile Gebrselassie, has called for the resignation of high-ranking members of the EAF, Fana Broadcasting reported.