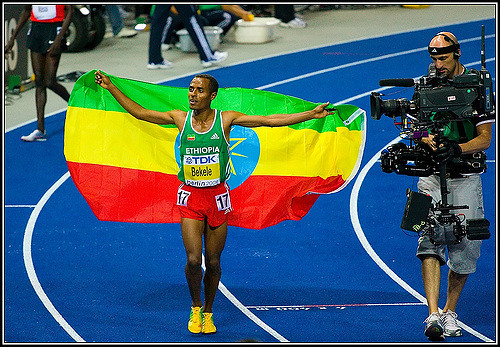 Ethiopia’s 5,000m and 10,000m world record holder, Kenenisa Bekele, who was not included in the country’s team for the upcoming Rio 2016 Olympic Games, has expressed his disappointment at the decision on Wednesday.

“I’m deeply disappointed and sad. I have long overcome my Achilles tendon injury, and I was ready for the challenge,” Bekele said.

Ethiopia’s Athletics Federation did not to include Bekele in the country’s 2016 Olympic team as he did not pass the selection criteria. The decorated triple Olympic winner did not make the 10,000m and marathon teams.

According to the Federation, Bekele was left out because he did not compete in enough big events last year, Reuters reported.

However, Bekele says officials in the Federation, who have very little knowledge of athletics, set the criteria knowing he would be ruled out.

“The federation set a criteria they knew very well would rule me out,” the 34-year-old said. “I finished third in the London Marathon (in April) when I was far from 100 percent fit. I’d done my preparation in full. Everyone knows that London is the toughest marathon except people from the federation. There is a group there that know nothing about athletics.”

“According to their criteria, I’m only seventh in the selection list. That they did not consider what I have done for Ethiopia athletics is one thing, but the problem is that they have not considered that my performances have been no worse than those who have been selected,” Bekele stressed.

Bekele, who has won more than 20 medals for Ethiopia, is not the only high-ranking athlete to have been excluded from the Olympic team.

Last month, a group of about Ethiopian runners gathered outside the National Stadium in Addis Ababa to protest against the federation’s Olympic team selection process.

Ethiopia’s legendary long-distance runner Haile Gebrselassie, who was among the protesting athletes, said the country’s federation is “marred with incompetency.”

Ethiopia athletic authorities have since announced their team for the Olympic Games that begins in next month, August.

The athletes that made the Ethiopia marathon team includes 2015 Boston Marathon winner Lelisa Desisa and the 2016 Tokyo Marathon winner Feyisa Lilesa. Lemi Berhanu and Tesfaye Abera also made the team.