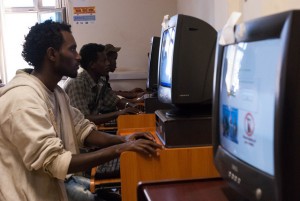 Ethiopian lawmakers on Tuesday passed the country’s first ever cybercrime bill. The bill was presented to parliament in April by the Ministry of Science and Technology.

The Ethiopian House of People’s Representatives (HPR) approved the Computer Crime Proclamation bill which aims to regulate and protect against cybercrimes.

The new law will protect against local and foreign cybercrimes targeting government institutions and infrastructure. The bill is also aimed at protecting the rights of individuals.

The law was created due to the growing penetration of the Internet, computers, and cell phones in Ethiopia.

A prison sentence of five to ten years is the stipulated punishment for the transmission, distribution and possession of illegal content in the form of cyber pictures, videos, text and audio speeches.

The Information Network Security Agency has been mandated to investigate cybercrimes.