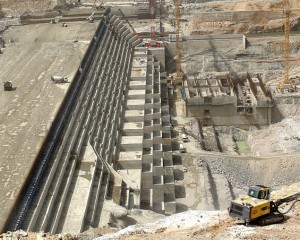 Egyptian officials are outraged by remarks by Ethiopia’s communication minister that the Grand Ethiopian Renaissance Dam (GERD) is about 70 percent complete.

Minister Getachew Reda said this week that the completion of the mega-dam has become a “reality,” and that “no matter what happens, things will not change.”

“When the turbines are installed, 70 percent of the project will be complete,” Reda said during an interview.

Since 2010, when Ethiopia announced its plans to construct the 6,000 MW Dam, there have been disagreements with its neighbors. Sudan and Egypt, both beneficiaries of the Nile, have expressed worries about the project.

Technical studies into the possible negative effects of the construction of the dam are currently being conducted by Dutch and French consultancy firms.

The GERD, which is being built on the Blue Nile, will have a storage capacity of 74 billion cubic meters of water.

When asked about the progress of the dam and the ongoing technical studies into the possible effects of the dam, Reda reportedly said: “The work of (the consultants) is not related to the construction process….if  someone found that the dam affects him after these consultations, it would be his own problems, not ours.”

“These committees are specialised in studying whether the dam would harm Sudan or Egypt and not whether to build or not to build the dam,” Reda added.

“The dam will not harm the interests of Sudan and Egypt, ” he stressed. “The Egyptians have finally understood that it is necessary to reach some kind of understanding, which compels us to work together.”

Reda’s comments apparently did not sit down well with some Egyptian officials who blamed the ineptitude of their mediators.

“The Ethiopians are currently talking based on their power, which they gained after the Egyptians has lost all means of pressure due to the impartiality and arrogance of the team responsible for the talks on the dam,” Egypt’s former Irrigation Minster Mohamed Nasr Allam said.

Despite his remarks, Egypt’s top intelligence official, Colonel Kamal Amer said: “There is an agreement between the two countries stipulating that Egypt’s access to water from the Nile will not be affected.”

Once completed, the GERD will be the biggest hydroelectric power plant in Africa. The Ethiopian government has consistently voiced assurances that the dam will not negatively affect downstream countries – particularly Sudan and Egypt.