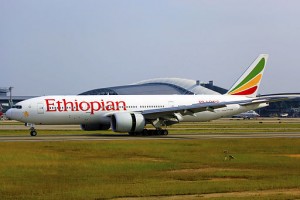 An Ethiopian Airlines flight attendant sustained injuries after the nose gear of a plane heading to Italy from Addis Ababa on Friday broke down moments before takeoff.

According to the Aviation Herald, the accident happened after the nose gear of the Boeing 787-800 aircraft collapsed. The plane was reportedly heading to Rome’s Fiumicino Airport. The plane had apparently been boarded and was about to take off when the incident occurred.

Besides the flight attendant, who sustained minor injuries, no other injuries have been reported from the incident. All passengers aboard the flight reportedly escaped unscathed. However, the Ethiopian Airlines aircraft was reportedly severely damaged by the incident.

The multi-award winning airline is yet to make an official statement regarding the accident.  However, aviation experts say such nose gear accidents are not rear.

Ethiopian Airlines covers the globe with about 92 international destinations in five continents. The state-owned airline is the fastest growing in Africa with an average annual growth of 25 percent in seven years.