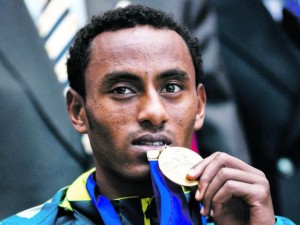 Ethiopia’s Endeshaw Negesse has reportedly failed a doping test. The 2015 Tokyo Marathon winner is one of nine Ethiopian athletes under investigation for doping after testing positive for banned substances.

The World Anti-Doping Agency recently listed meldonium as a banned substance. The drug, which athletes use as a performance enhancer, is meant to treat ischemia – a condition of restricted blood supply to the muscles.

This week the image of Ethiopian athletics has suffered great blows. On Monday, Solomon Meaza, the general secretary of Ethiopia’s anti-doping agency announced that five of the nine runners under investigation for doping are high-profile athletes.

Reports indicate that both Negesse and Aregawi tested positive for meldonium, which the World Anti-doping Agency only banned on January 1,  this year. Aregawi has been suspended pending the results of her B-sample.

A Ukrainian doctor is allegedly responsible for the presence of meldonium in Ethiopia. The doctor, whose identity is yet to be revealed, is believed to have transported the banned substance into the country.

The attention of the IAAF is expected to shift to Ethiopia after investigations into Russian and Kenyan athletics last year revealed widespread doping and corruption.  Whistleblowers have reportedly tipped international drug testers to focus on several Ethiopian athletes.

Many fear the negative impact that investigations into Ethiopian athletics could have on the image of the sport just months before the Rio Olympics.

Ethiopia has been under the radar of international doping authorities for years now after evidence revealed loose anti-doping practices.
The identities of the other athletes being investigated for doping are expected to be announced in the coming weeks.