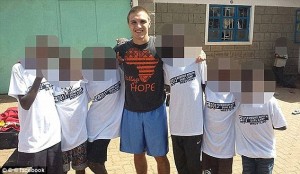 A 21-year-old American man, accused of sexually abusing children at a Kenyan orphanage where he volunteered, has been acquitted of some charges.

In June, Matthew Lane Durham, the accused, was found guilty of seven counts of engaging in illicit sexual conduct in foreign places. Durham, who has worked in Nairobi’s Upendo Children’s Home since 2012, was convicted of charges involving the abuse of a 12-year-old boy and girls aged from 5 to years-old.

However, on Tuesday, U.S. District judge David Russell acquitted Durham of three of charges. The federal judge cited that government prosecutors failed to establish that the accused “engaged in a sexual act with the victim alleged in those counts.”

Russell added that two of the victims did not testify in Durham’s trial and the third’s statements did not buttress the government’s allegations.

Five of the alleged victims reportedly traveled to the U.S. to testify in the trial. The children, who spoke Swahili, testified through an interpreter only after the judge cleared courtroom of the public and media.

The judge also rejected a request for Durham to face a new trial.

Prosecutors say between April and June 2014, Durham targeted the children. However, the jurors cleared the defendant of the charge that he planned to sexually abuse the children before traveling to the U.S.

Eunice Menja, co-founder of Upendo Children’s Home, said the ruling was shocking because she under the impression that Durham was already convicted of all the charges.

“I was really shocked because I thought from the beginning that he was guilty of all the charges,” Menja said.

She added that at this point the main purpose of the organization to ensure that the children are well following their ordeal.

“The children’s healing is paramount to us,” she said. “We continuously assured them that Matthew is never going back to Kenya.”

A sentencing date has not yet been set for Durham.