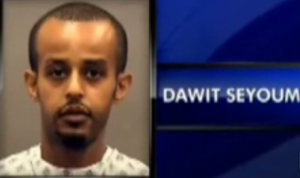 An Ethiopian man charged with first-degree murder in the 2014 slaying of a high-ranking District of Columbia Correctional official has been acquitted after his insanity plea was accepted.

On Thursday, by reason of insanity, 30-year-old Dawit Seyoum pleaded not guilty to the murder of Carolyn Cross at her Alexandria apartment in September 2014.

The court’s acceptance of the plea ends the complex case which has produced two previous mistrials. In each case, the jury failed to reach a unanimous verdict regarding Seyoum fate – if he was criminally responsible for killing Cross in cold blood or not.

Prosecutors of the case, deputy Commonwealth Attorney Cathryn F. Evans and Attorney Andrew S. Criado, acknowledged the complexity of the case. As a result, they only agreed to the plea after 10 days of deliberating with the members of the jury.

“Ms. Cross was senselessly attacked by a stranger with significant mental health issues. She is sorely missed by those that loved her, and I regret that we were unable to secure a conviction in this matter,” Alexandria Commonwealth’s Attorney Bryan Porter said.

“The fact that both juries were unable to reach a unanimous verdict shows the complex nature of the evidence.”

According to reports, Seyoum did not know Cross. He apparently decided to kill her “because he didn’t like the way she looked at him” when they met at the Seminary Towers located on Kenmore Avenue, where she lived.

Seyoum, who was determined to kill someone that day after having an argument with his mother, reportedly followed Cross into her apartment. She is said to have been preparing to leave for a Women’s Leadership conference when he attacked and killed her.

Seyoum struck Cross 15 times with a wrench before covering her head with a plastic bag. Cross was later found by her daughter, Clarissa Davis.

Officials later found Seyoum lying in a fetal position in his apartment wearing only his underwear. He had reportedly slit his wrist and wrote “I was the dirty one” with his blood on the bathroom wall.

Reports indicate that he called 911 after his suicide attempt.

Seyoum will now be transferred for evaluation with the Commissioner of Behavior Health and Development Services. He will be held in a secured mental health facility during the duration of the evaluation process. His status is to be reviewed at a court hearing scheduled for Feb. 11, 2016.