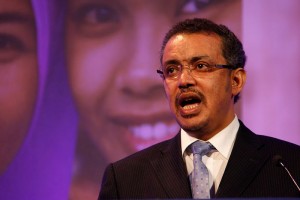 Ethiopia has postponed a meeting with Egypt and Sudan on the Grand Ethiopian Renaissance Dam (GERD). The announcement came on Saturday, a day before the initial meeting was supposed to be held in Khartoum.

According to Ahmed Abu Zeid, spokesman of Egypt’s Foreign Ministry, Adhanom shifted the important meeting after receiving orders from Addis Ababa. Adhanom apparently has to be present for an “important visit” to Kenya on the same day of the Grand Renaissance Dam meeting.

He will accompany Ethiopia’s Prime Minster Hailemariam Desalegn on the said visit to Kenya.

Egypt and Sudan are particularly worried that the construction of the dam will affect their share of water received from the Nile as stipulated in an agreement signed in the 1950s.

Egypt currently receives about 55 billion cubic meters (14.5 billion gallons) annually from the Nile. Egypt had requested permission to study the design of the dam to allay its fears that its historic share of the Nile water would not be reduced.

However, Ethiopia has consistently assured its neighbors that the dam will not negatively affect downstream countries.

“As part of negotiations, Egypt seeks to preserve its historical share of the Nile River water and ensure that the period during which the water is being stored in the Ethiopian dam does not affect that share,” Egypt’s Prime Minister Sherif Ismail said.

The postponed meeting was important; it was scheduled to focus on the technical issues regarding the dam’s construction. The three neighboring countries have disagreed over the methods employed by the Dutch and French consultancy firms contracted to conduct technical studies on the effects of the dam.

The irrigation and foreign ministers from Egypt, Ethiopia and Sudan are scheduled to be present at the upcoming meeting about the Grand Renaissance Dam.