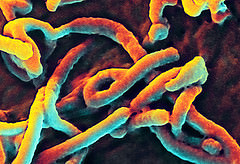 CONAKRY – The World Health Organization (WHO) announced on Friday that two people have become infected with the Ebola virus in Guinea. This revelation comes a few days after medical studies conducted on male Ebola survivors showed that the virus can continue to linger in the seminal fluid of patients for many months after they have been healed.

Fode Tass Sylla, the spokesperson for Guinea’s national Ebola co-ordination center, has speculated that the Ebola patient in Conakry is likely to have contracted the virus through sex.

Medical experts have always suspected that male Ebola survivors could easily transmit the virus to females through unprotected sexual intercourse. Earlier studies suggested that Ebola remains in the semen of male survivors for 82 to 199 days after the onset of the virus’ symptoms.

Two new studies, published in the New England Journal of Medicine on Monday, also concluded that Ebola could remain in the semen of male survivors for up to six months or longer after the initial onset of virus’ symptoms. Health experts have therefore warned Ebola survivors and their partners to use a condom or other forms of protection when having sex.

In a different study, researchers found out that a group of Guinean women have developed antibodies for the Ebola virus. Some of these women are reported to have never contracted the disease.

Medics say the new discoveries being made about the virus will help prevent future outbreaks and enable researchers develop an effective cure.

Experts are beginning to question the effectiveness of Ebola vaccines and speculate about resurgent infections after a Scottish nurse, who was treated for the virus, started showing symptoms again this week. Pauline Cafferty passed the Ebola health check at Heathrow Airport on her way back from Sierra Leone before she started showing any symptoms of the virus in January. She was later isolated and successfully treated at the Royal Free Hospital. On Wednesday, reports surfaced that Cafferkey’s condition had grown worse.

“What we have seen is that in some people, the virus lies dormant at a site and then for some unknown reason, starts to reproduce again,” Dr. Margaret Harris, WHO spokesperson, explained.

Ebola has claimed the lives of an estimated 11,000 people since the outbreak in West Africa last year. The latest Ebola cases in Guinea are the latest after a brief spell without any new infections. Last month, Liberia was declared Ebola-free after 42 days without any new infection. Meanwhile, experts are optimistic that Sierra Leone would also be declared free of the virus in about three weeks.