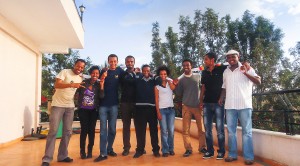 ADDIS ABABA – The four remaining imprisoned members of the Zone 9 blogging group appeared in a court in Addis Ababa on Friday for their 39th hearing.

Since their arrest, the four bloggers – Abel Wabela, Atnaf Berhane, Natneal Feleke and Befeqadu Hailu – have spent about a year and six months in prison.

On Friday, after spectators waited for a long time for the case to begin, a judge finally read the charges against the four bloggers, as well as fellow Zone 9 member Solinyana Shimeles. He went on to declare her not guilty, and pronounced the same verdict for Feleke, Behane and Wabela. However, Hailu was found guilty of violating Article 257/A of the criminal code.

In April 2014, Ethiopian police officers arrested about six Zone 9 members. The bloggers, as well as three journalists, were charged with terrorism.

However, critics say the Zone 9 bloggers, who got their name from an area in an Ethiopian state prison notorious for housing political prisoners, had been targeted because they defied the odds to speak up about injustice.

In July, the authorities released two Zone 9 members and the three journalists who had been arrested with them. The charges against them were also dropped.

The release of the group, which coincided with the visit of U.S. President Barack Obama to the region, was thought to represent a new outlook for the case. But this wasn’t so.

Several human rights groups including Reporters Without Borders (RSF) have demanded the release of the group. Meanwhile, in an act of solidarity, the Committee to Protect Journalists (CPJ) has awarded the 2015 International Press Freedom prize to Zone 9. There are speculations that the bloggers were subjected to torture and other forms of mistreatment while imprisoned.

When the group was arraigned in court last week Friday, there was outrage after two judges failed to show up to the trial because they were receiving “training.” Critics have accused Ethiopian authorities of dragging out the case to frustrate the bloggers and their supporters.

Pundits say the protracted trial and incarceration of the bloggers has put the spot light on restrictions of freedom of speech in Ethiopia, where journalists are routinely sentenced to death for their stories.

Meanwhile, a bail hearing for Hailu has been scheduled for Oct. 21.

After the trial, Shimeles noted on Twitter that she cannot really celebrate the verdict until her colleagues are actually free from police custody. “ok call me cynical but I want to see them out for real. My trust on that judiciary system is this low,” she wrote.