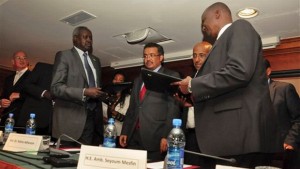 A new round of discussions between representatives of the warring factions in Addis Ababa failed to resume as scheduled on Monday as both sides failed to show up, officials say.

The Intergovernmental Authority for Development (IGAD) chief mediator, Seyoum Mesfin, who confirmed the news to the press, condemned the development, noting that “with every day passing, human lives are lost and destruction continues.”

He went on to urge both sides to return to the negotiation table.

Reports indicate that despite the absence of the key parties in the conflict, several other delegates (including religious and tribal leaders) were present for the meeting.

The talks between representatives of President Salva Kiir and his former deputy Riek Machar has suffered perennial delays since it was initiated earlier in the year.

Last week, both men met in Addis Ababa and reaffirmed their commitment to the discussions aimed at ending the winding conflict. They also agreed to open the door for other stakeholders to participate in the talks.

However, the rebels claim to have been side-lined in the selection of delegates for the meeting.

According to Radio Tamazuj, the government imposed travel restrictions on some politicians; thus preventing them from attending a symposium in Addis Ababa last week, where the delegates were selected.

The rebels, who claim most of the selected delegates are self-nominated individuals from government-controlled areas, have demanded that political and civil society groups in areas under their control are also given fair representation.

They have further noted that the process of selecting the delegates must be “credible, transparent and inclusive.”

In an open letter to IGAD last week from a coalition of South Sudanese civil society organizations named Citizens for Peace and Justice (CPJ), the group also claim to have been excluded from the talks and replaced by a new group of seven individuals.

The letter states that “The new group of seven does not reflect the diversity of the outgoing group, and as a result of this decision, many of the most capable and highly regarded CSOs [civil society organizations] in South Sudan have been cut out in the process.”

Meanwhile, reports indicate that the government’s side boycotted the meeting yesterday due to some unsavory comments by a top IGAD official.

During an IGAD symposium in Addis Ababa last week, IGAD Executive Secretary, Mahboub Maalim, said both sides are ‘stupid’ if they assume their dispute can be resolved militarily.

South Sudan’s Minister for Information and the leader of the government’s delegation, Michael Makuei, has noted that this comment must be addressed before his side will return to the negotiation table.

According to him, “If President Salva Kiir and rebel leader Riek Machar are stupid, it means the people of South Sudan are stupid, which is an unacceptable description.”

He revealed that the South Sudanese government has written a letter to the Prime Minister of Ethiopia and current IGAD chairman, Hailemariam Desalegn, expressing their concerns over the ‘unbecoming and unacceptable’ use of insults, and have demanded an explanation.

It is currently unclear when the talks, which is reported to have cost over $17 million thus far, will resume.

Many commentators have lashed out at both sides with criticisms for stalling the peace process. Some have expressed a cynical opinion that the delays are an attempt to buy time, while both sides try to secure the advantage on the battlefield.

The six-months-long war in South Sudan has led to the deaths of an unknown number of people (estimated to be in the thousands), and the displacement of about 1.5 million people, according to the United Nations (UN).

This past weekend, the United Nations Humanitarian Coordinator in South Sudan, Toby Lanzer, revealed that the humanitarian situation in the country is getting worse.

According to Mr. Lanzer, up to 50,000 children could lose their lives this year if they do not receive assistance from aid agencies. He also disclosed that up to 7 million people across the country are currently at risk of experiencing starvation and disease.

While the UN and many other humanitarian groups have been operating in South Sudan virtually since the beginning of the insurrection, reports indicate that fighting and rains have prevented them from delivering aid and medical assistance to some of the most vulnerable displaced people.

Mr. Lanzer appealed to South Sudanese authorities to open the water ways to facilitate the delivery of aid cheaply. The UN has since turned to air drops to transfer supplies to some of the most remote locations in the country. But, reports indicate that this is an expensive option.

According to Mr. Lanzer, the UN has thus-far only been able to raise about $740 million of its $1.5 billion budget.