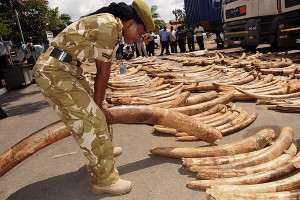 The Secretariat of the Convention on International Trade in Endangered Species of Wild Fauna and Flora (CITES) has revealed that despite some reductions from previous years, poaching remains dangerously high in Africa.

According to the report published on Friday, about 20,000 elephants are estimated to have been killed for their tusks in the continent last year. While this represents only a slight reduction in the figures from the past two year, it is a great improvement from a few decades ago.

John E. Scanlon, Secretary-General of CITES, explained that “Due to the collective efforts of so many, we also see some encouraging signals, but experience shows that poaching trends can shift dramatically and quickly, especially when transnational organized crime is involved.”

The report notes that poaching is increasing dramatically in about 33% of the monitored sites on the continent; such as the Dzanga Sangha Special Reserve in Central African Republic.

Pundits say the same is true for the Democratic Republic of Congo; where poachers have adopted new tactics, including employing ex-rebel combatants.

Poachers are also reported to have acquired sophisticated tools in the past year, including chainsaws and helicopters.

The report goes on to note that about 500kg of illegal ivory shipments were intercepted before they left the continent last year.

According to CITES, this is indicative of an improvement in the fight against illegal poaching; as it is the first time the amount of illegal ivory shipments seized on the continent exceeds those in Asia.

Although about 80% of the confiscated ivory shipments were recorded only in Kenya, Tanzania and Uganda, the report notes that the new outlook on poaching is the result of increased surveillance from officials across the continent and China’s open support for the campaign.

The report further highlights the fact that large-scale ivory seizures are indicative of the involvement of transnational organized crime.

This assertion supports wild theories by some pundits that rebels and other anti-government groups on the continent may be capitalizing on this lucrative trade to fund their illegal operations.

However, no solid evidence has been provided to support this theory.

Meanwhile, in China, reports indicate that the demand for mammoth tusks have increased – these tusks are considered a legally acceptable alternative to elephant ivory.