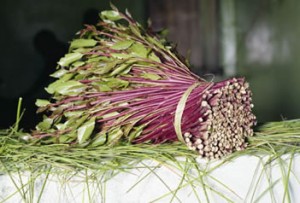 Several top Kenyan officials have criticized the impending ban on miraa in the United Kingdom and have vowed to press for its reversal.

The plant, which is widely used in East Africa and by Africans in the diaspora, has been declared a ‘Class C’ drug by the UK Home Office.

According to the ban, from June 24, it will be illegal to posses, use or deal in the plant in the UK without a license. The consequences for flouting this ban includes a 14-year imprisonment sentence and an unlimited fine.

Many pundits have condemned the ban; noting that it cannot be based on scientific facts. However, the UK Home Office has pointed out that the ban is being effected to “help protect local communities from the potential health and social harms associated with khat and to ensure that the UK does not become a hub for international khat smuggling.”

The plant is already considered a contraband in Europe, Canada and the United States; where it has also been classed as a drug.

Several pundits have cautioned that the ban will have a devastating effect on farmers in Meru and other counties which have historically depended on growing the mild stimulant for their livelihood.

He vowed to organize consultations among local leaders to deliberate on ways of controlling the security risks involved in the trade. Mr. Odinga, however, also urged the British government to review its ban on the plant.

This weekend President Uhuru Kenyatta voiced similar sentiments. He noted that the government will take the issue to the ‘highest possible level’.

He further disclosed that some legislators have already taken the case to court and also pledged the government’s support for efforts to cushion the effects of the ban on local khat-growing communities.

Last week, some lawmakers noted that the ban is likely to affect the relationship between Kenya and the United Kingdom. According to them, the ban, which was described as ‘sinister’ cannot be grounded on any solid reasons.

Some lawmakers have even threatened to force British khat-farmers in Kenya to give up their farms if the ban persists.

Local sources say the trade in khat is very lucrative and is estimated to generate about $500 million annually.

But the ban will not only affect local farmers; according to some British lawmakers, who oppose the ban, the UK government stands to lose up to £12.8 million from taxes on khat imports annually.

Many pundits say the ban is likely to fail due the profitability of the trade in a region with staggering unemployment rates. Dealing in khat is considered one of the most rewarding ventures for some local communities.

Reports indicate that some farmers have also vowed to take the case to the European Court of Justice.