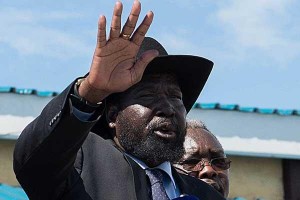 The government and people of South Sudan have commemorated the formation of the Sudan People’s Liberation Army (SPLA) on Friday, May 16th.

Local sources indicate that a large crowd have convened at the Dr. John Garang Memorial Park to mark the 31st anniversary of the SPLA.

The SPLA was originally a guerilla movement formed in the 1980s to battle the Sudanese government. However, upon the secession of the south, the militants have been incorporated into the national army of South Sudan.

President Salva Kiir, in his speech, extolled the patriotism and sacrifice of countless SPLA fighters that led to the formation of South Sudan. He particularly honored those who passed on during the protracted war.

The president went on to explain that the outbreak of violence between his guards in December last year was unnecessary. He also vowed to take responsibility; adding that he has ordered the army to stop any offensive campaigns against the rebels.

He also denied directing the army to attack Nuer civilians in Bor and other parts of the country, as the rebels claim.

The president further confirmed claims of cholera outbreak in South Sudan. According to the health ministry, up to 18 cases of the infection have been recorded in Juba.

Over 1 million people have reportedly been displaced since the war began in South Sudan late last year. While many of them have been able to leave the country, a large percentage are reportedly hiding in make-shift camps created by humanitarian agencies.

According to the health ministry, the overcrowding, poor hygiene and sanitation in these camps is conducive to an outbreak of cholera. However, the Ministry has expressed its determination to stop the disease from spreading further.

Reports indicate that the ministry had already embarked on a cholera vaccination campaign prior to this outbreak of the disease.

Meanwhile, President Kiir has extended his gratitude to the United Nations and other humanitarian agencies who have supported South Sudan during this short war. He went on to direct all the internally displaced people sheltered in UN compounds across the country to return to their homes.

But in spite of the recent ceasefire agreement, reports have emerged of clashes in at least two states in the war-torn country.

Meanwhile, in Addis Ababa, the Intergovernmental Agency for Development (IGAD) has announced that the ongoing peace talks has been postponed to an undisclosed later date. Reports indicate that the break is to permit the participation of civil society and the other South Sudanese political interests in the negotiations.