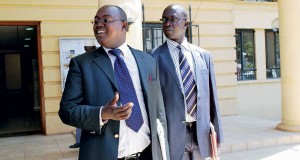 A Kenyan High Court has issued an order for the arrest and extradition of a journalist wanted by the International Criminal Court (ICC) on Wednesday.

Walter Barasa, 41, has been charged by the ICC under article 25(3)(a) and article 25(3)(f) of its Rome Statute. He is wanted for allegedly conspiring to bribe witnesses to alter their testimonies in the ongoing trial of Kenya’s leaders. The journalist has also been accused of furthering the ‘criminal schemes’ of corrupt officials within the Kenyan administration.

But Barasa has denies all the charges levelled against him and has attempted – unsuccessfully – to prevent his transfer to The Hague.

Justice Richard Mwongo in making his ruling, explained that there are no reasons for Kenya to protest against the ICC’s request for Barasa’s extradition. He also revealed that Interior and National Coordination Cabinet Secretary, Ole Lenku, acted legally when he attempted to take Barasa into custody last year.

Barasa had protested against the attempt to take him into custody, explaining that his fundamental human rights had been violated as he was not shown any warrant for his arrest. He had reportedly also requested to have his case heard in Kenya.

Meanwhile, the trial of William Ruto and journalist, Arap Sang, resumed at The Hague on Wednesday.

The case against Kenya’s leaders has been plagued by the prosecution’s struggle to secure witnesses amid several unexpected withdrawals reportedly due to underhand intimidation by the authorities.