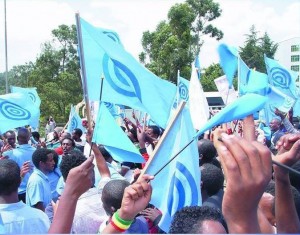 Police officers have reportedly jarred with members of the opposition Blue Party once again during the group’s much anticipated demonstrations in the past two days.

Reports indicate that security agents attempted to divert the protesters from their planned course.

However, the party has announced on social media that “we insisted and once again stood firm for our right to go whichever way we liked to pass through!”

Several top members of the relatively new Semayawi Party were reportedly arrested in the build-up to the protests, which began on Sunday, April 27th. Online reports indicate that up to 50 members of the party have been taken into custody – including the party chairman, Yilikal Getnet, who was, however, released shortly.

The Blue Party is regarded as the first opposition group to successfully convene a large scale protest in Ethiopia since 2005. In June last year, the party brought together more than 1,000 people for a major demonstration against the government in Addis Ababa.

However, in August, reports emerged that the party’s offices were raided and several of its top members arrested for plotting a demonstration which allegedly did not have the approval of the authorities.

After the death of Meles Zelawi in 2012, many pundits had speculated that Ethiopian authorities would alter their heavy-handed approach to dealing with dissent. However, reports indicate that this repression has not abated.

Recently, 6 members of an Ethiopian activist online community, ‘Zone 9’, have been arrested. Reports indicate that the group have been barred from entertaining visitors since they were taken into custody on Friday, April 25th. Although the authorities are yet to divulge the reason for their arrest, many commentators have connected it with the group’s strong criticisms of the ruling Ethiopian People’s Revolutionary Democratic Front (EPRDF).