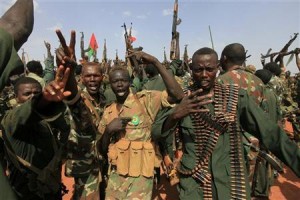 According to a spokesman for the mutineers, Brigadier General Lul Ruai Koang, the rebels have completed a “mopping and cleaning up” exercise on Tuesday to clear the town of government forces.

He described the small victory as “the first phase of liberation of oil fields from anti-democratic and genocidal forces.”

Brig. Gen Koang further directed all petroleum companies in South Sudan to shut down their operations and evacuate the country or risk being forcibly closed.

Reports indicate that, meanwhile, oil companies in Bentiu have been given one week to pack up and leave.

Since the outbreak of violence in the country late last year, oil production – the primary source of national income – has been significantly reduced.

Last month, the Press Secretary to the South Sudanese President, Ateny Wek Ateny, told the press that the country’s rate of oil production has been reduced by 29% – from about 245,000 barrels per day in early December 2013, to only 175,000 barrels per day.

Reports indicate that oil production had been virtually halted in Unity State for some time now, allegedly due to damages to some equipments used to facilitate the process. However, production has continued in the country’s largest producing state, Upper Nile.

At least 5 employees of the multinational are reported to have sustained injuries.

Reports indicate that the fighting in Unity State began over the weekend in remote oil installations.

The attack on Bentiu confirms Riek Machar’s recent statement to the press that if President Salva Kiir, whom he described as a dictator, is to be ousted, “Juba is a target, oil fields are a target.”

Despite a ceasefire agreement between the warring factions in January, fighting has continued to rage in the world’s youngest nation.

Last week, the Intergovernmental Authority for Development’s (IGAD) ceasefire monitoring and verification team officially commenced their duties in the country.

Meanwhile, IGAD has announced that the discussions between the government and rebels is scheduled to resume on April 22nd following a prolonged break to consult with both sides.

South Sudan’s warring factions had put forward contradictory preconditions for the peace talks to progress. While rebels want the 7 politicians in Kenya accused of complicity in the alleged coup attempt to partake in the deliberations, the government has requested the opposite. IGAD recently announced that the 7 politicians will be excluded from the talks when it resumes later in the month.

Aid groups have reported that the humanitarian situation in South Sudan continues to worsen as more people are displaced.

With the rainy season fast approaching and supplies dwindling, the threat of famine has also been a source of concern for many observers. Reports indicate that while the violence has largely prevented farmers from planting, aid groups have also expressed concerns over their inability to shore up the necessary funds for their humanitarian operations.