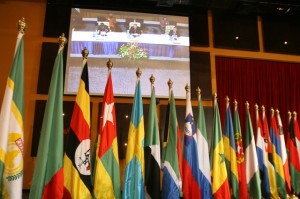 The 4th EU-Africa Summit kicked off yesterday in Brussels, with attendance from African and European leaders from about 80 nations.

Leaders from the two continents have converged in Belgium to discuss commerce as the deadline approaches for tariff-free trade accords.

So far, only four African nations have reportedly endorsed this agreement.

Observers say African countries are concerned over the effects of opening their markets to European goods and have reportedly been postponing any decision on the matter.

Under the theme “Investing in peace, people, and prosperity,” the two-day summit is expected to focus on numerous issues including peace, training and education, as well as security.

African leaders have expressed a desire to alter the current trade imbalance, which favors European countries.

The summit began with discussions on the increasing violence in the Central African Republic (CAR).

The meeting comes after the European Union(EU) unveiled plans to send 1,000 security forces to the strife-torn CAR to reinforce the existing French and African forces in the country, according to Deutsche Welle (DW).

Also top on the agenda is the issue of trade with Europe reportedly planning to convert its association with Africa from that of a development partner to that of an investor and trader.  Analysts say European leaders plan to end Africa’s reliance on European state-funded aid and reinforce ordinary trade relationships.

Although the EU has been a major trading partner in the continent for many years, analysts argue that African leaders seek a partnership founded on equality and mutual respect.

According to international media, this summit is a chance to gain a new perspective on the EU-Africa partnership, highlight some of the achieved results and explore areas for future collaboration.

According to the summit’s agenda, the leaders will discuss methods of developing investment initiatives and inspiring growth that would lead to job creation for young people.

Security has also featured prominently in the agenda with President Uhuru Kenyatta of Kenya underlining the growing insecurity in the region, particularly in relation to recent incidents in Somali, Egypt, CAR, and South Sudan.

Angela Merkel, Germany’s Chancellor, has, meanwhile, appealed for a new approach to Africa at the beginning of the summit.

She highlighted the importance of European countries appreciating the opportunities in African countries rather than constantly focusing on the problems.

Some of the other attending European leaders are French’s President, Francois and Italy’s Prime Minister Matteo Renzi along with African leaders including Liberia’s President, Ellen Johnson and Nigeria’s Goodluck Jonathan .

Herman van Rompuy, the President of the European Council has expressed hope that the summit would mark a new phase in the EU’s association with Africa.

Zimbabwe’s President, Robert Mugabe is said to have boycotted the event on short notice in protest against the EU’s refusal to temporarily postpone a visa ban on his spouse. Another notable absentee was Sudanese President Omar al-Bashir.